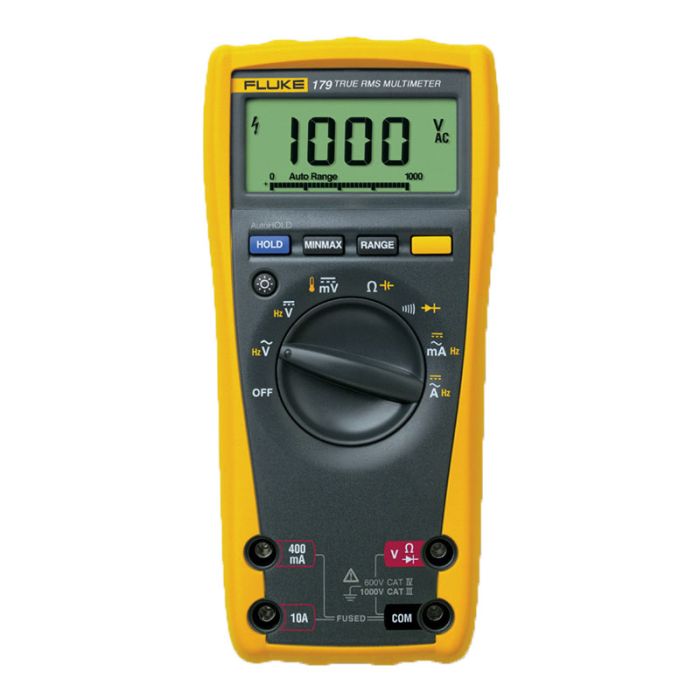 The Fluke 179 is the complete True RMS multimeter, its vast number of features making repairing/maintaining any electric system quick and easy. With all these features crammed into the instrument, Fluke could be forgiven for making a convoluted tester that is difficult to navigate, however Fluke's 179 multimeter has a simple function dial layout with an easy to follow menu system.

The main thing that separates the 179 from the previous 175 and 177 is the in-built thermometer (K-Type adaptor and probe included). This can help to prevent overheating issues in components or be used in numerous HVAC situations. The multimeter can measure AC/DC Voltage, AC/DC Current, resistance, capacitance, frequency and continuity. The unit also has an average battery life of 200 hours (without backlight).

Coupled with all these measurement capabilities are features like the MIN/MAX average, display hold and auto hold, and the manual and automatic ranging that make your work more efficient. The Fluke 179 also includes a responsive analogue bar graph to help clearly identify signal fluctuations during testing.

As with all Fluke testers, safety is the number one priority. The Fluke 179 is independently tested for safe use in CAT III 1000 V, CAT IV 600 V environments.

Write Your Own Review
Only registered users can write reviews. Please Sign in or create an account
Related Products
Check items to add to the cart or