Testo Thermal Brochure
(Size: 2.1 MB)
Skip to the end of the images gallery 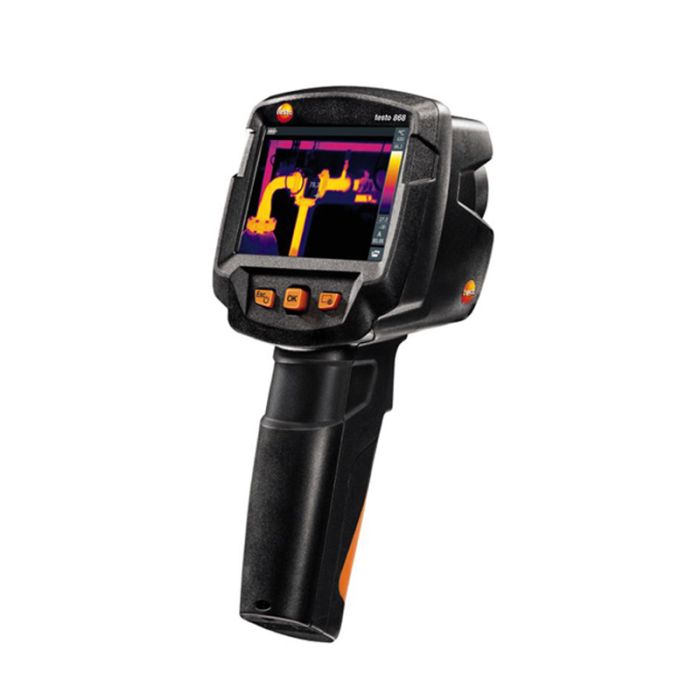 Thermography connected - with the testo 868s thermal imaging camera. It has the best thermal image quality in its class, an integrated digital camera and stands out thanks to smart new features with intuitive operation in a modern tile appearance. The testo Thermography App turns your smartphone or tablet into a second display. In addition to this, you can operate the imager with the App as well as creating and sending reports on site.

When considering a thermal camera, thermal resolution is often the starting point. The testo 868s has 160 x 120 resolution, which is increased to 320 x 240 with testo SuperResolution software. This software enhances the thermal resolution by four times for more detailed thermal images.

The testo 868s thermal camera builds on the entry level testo 865s model, with a range of useful features including:

Thermal sensitivity and measuring range
The testo 868s is ideal for applications where more accurate temperature readings are required, or where a larger measuring range is needed, up to +650°C. The unit’s thermal sensitivity of 80mK provides the user with confidence that the camera is reporting measurements accurately and that small temperature differences are being recorded with a low margin of error. Also, auto hot / cold spot recognition allows fast pinpointing of problem areas.

Testo thermography app
This app allows the user to quickly compile compact reports which can be saved online and easily sent via email. Images can also be streamed live to a smart device, effectively providing a second screen, allowing your customer to see exactly what you do in real time. This is ideal for when it may not be practical for the customer to be stood with the user, for example where there are high levels of noise.

Testo e assist
Via the integrated digital camera, the testo 868s recognises the reference sticker (e marker) and then automatically adjusts the emissivity setting depending on the emissivity and reflected temperature. This features helps reduce inaccurate measurements as a result of emissivity caused by user error. 3 e markers are included with the Testo 868s.

The testo 868 is a fixed focus thermal camera and has the same field of view as the Testo 865s at 31° x 23°, it also features testo’s Infrared Field Of View (IFOV) warner, a system that ensures the measurement spot size viewed by the user on the thermal image shows exactly what you are measuring. This greatly reduces the prospect for measurement errors.